In the Shadow of International Law: Secrecy and Regime Change... 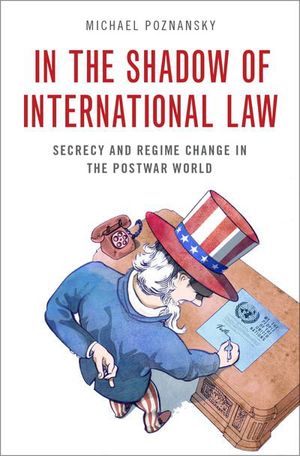 In the Shadow of International Law: Secrecy and Regime Change...

Papier
Régulier
Vous pourriez économiser 1,06 $ en devenant membre
Secrecy is a staple of world politics and a pervasive feature of political life. Leaders keep secrets as they conduct sensitive diplomatic missions, convince reluctant publics to throw their support behind costly wars, and collect sensitive intelligence about sworn enemies. In the Shadow of International Law explores one of the most controversial forms of secret statecraft: the use of covert action to change or overthrow foreign regimes. Drawing from a broad range of cases of US-backed regime change during the Cold War, Michael Poznansky develops a legal theory of covert action to explain why leaders sometimes turn to covert action when conducting regime change, rather than using force to accomplish the same objective. He highlights the surprising role international law plays in these decisions and finds that once the nonintervention principle - which proscribes unwanted violations of another state's sovereignty - was codified in international law in the mid-twentieth century, states became more reluctant to pursue overt regime change without proper cause. Further, absent a legal exemption to nonintervention such as a credible self-defense claim or authorization from an international body, states were more likely to pursue regime change covertly and concealing brazen violations of international law. Shining a light on the secret underpinnings of the liberal international order, the conduct of foreign-imposed regime change, and the impact of international law on state behavior, Poznansky speaks to the potential consequences of America abandoning its role as the steward of the postwar order, as well as the promise and peril of promoting new rules and norms in cyberspace."Michael Poznansky wrote an important book on the role of international law in decision-making about the use of force. It is a book all students who are interested in international security and foreign policy should read. Even if some of us are skeptical about the restraining effect of international law on leaders' decisions, In the Shadow of International Law offers a compelling theory and robust evidence to appreciate its importance." --Karen Yarhi-Milo, Professor of Political Science and International and Public Affairs and Associate Director of the Arnold A. Saltzman Institute of War and Peace Studies, Columbia University "In this volume, Michael Poznansky has taken on the difficult research subject of covert action-secret intervention by one state into the affairs of another. With a focus on Latin America and the United States, he examines the core question of why nations sometimes undertake regime change covertly and at other times overtly. The difference depends, he argues, on international law. When international legal barriers to intervention exist, nations resort to covert means. This book is well-researched and essential reading for anyone interested in the hidden side of American foreign policy." --Loch K. Johnson, Regents Professor Emeritus, School of Public and International Affairs, University of Georgia "Covert action is seductive to leaders who want to eliminate their enemies without going to war. Covert action is also paradoxical, as Michael Poznansky argues in this deeply researched and provocative new book. Leaders turn to covert regime change only when they cannot justify military intervention under international law. Strangely, their respect for the law causes them to break it." --Joshua Rovner, American University "If powerful states want to intervene in other states, why bother to hide it? Poznansky offers a carefully and compellingly argued response to this puzzling question: when intervening states can find a plausible justification in international law, they will engage in overt intervention; but when such justification is lacking, they will 'go covert.' Deeply researched and engagingly written, In the Shadow of International Law advances our understandings of the politics of international law as well as those of secret and not-so-secret interventions." --Tanisha Fazal, Associate Professor of Political Science, University of MinnesotaMichael Poznansky is Assistant Professor of International Affairs and Intelligence Studies in the Graduate School of Public and International Affairs at the University of Pittsburgh with a secondary appointment in the Department of Political Science. He is also a Non-Resident Fellow with the Modern War Institute at the United States Military Academy at West Point during the 2019-2020 academic year. Before arriving at the University of Pittsburgh, Dr. Poznansky was a predoctoral research fellow with the Belfer Center for Science and International Affairs at the Harvard Kennedy School. He received his Ph.D. in Foreign Affairs from the University of Virginia. Dr. Poznansky has published in a wide range of scholarly journals, including American Journal of Political Science, European Journal of International Relations, International Studies Quarterly, Journal of Global Security Studies, and Journal of Peace Research. He has also published in a variety of policy-oriented outlets, including the Council on Foreign Relations' Net Politics Blog, Political Violence at a Glance, War on the Rocks, and The Washington Post.